Our pipe floats are made to keep your pipes afloat. The Flootzer, as we named our pipe floats, are made of strong PVC material. You maybe know these floaters also as cable floats, hose floats or pipeline floats. All the floaters have one thing in common and that is to keep the pipeline afloat.

The pipe float consists of one or two inflatable cylinders. For each kind of cable, pipeline or hose a custom made Flootzer is available. Our Flootzer cable float 600 is the most common used pipeline float. This float can carry a weight up to 600 kilogram. The pipeline float will not use a lot of space when it is deflated. At the workplace the pipe float can be inflated.

Every situation is unique, because you have to take several things into account. Think about the total length and the weight of the pipeline.

The Flootzer pipe float is available in two different types. As mentioned with one or two inflatable cylinders. The pipe float with two cylinders is the most used one. Mostly the Flootzer cable float 600 is used. But in some special cases where heavy pipelines must have more buoyancy a single cylinders is used. Depending on the situation an offer is made.

In shallow waters the pipe float is mostly used. The Flootzer is used as an opportunity to keep your pipeline afloat. Also the pipeline will not be in contact with the soil. Dragging the pipe across the bottom will cause damage to the pipeline. By using the Flootzer pipe float this will not longer happen. Use our inflatable pipe floats and make your work way easier. 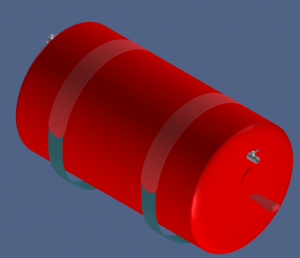